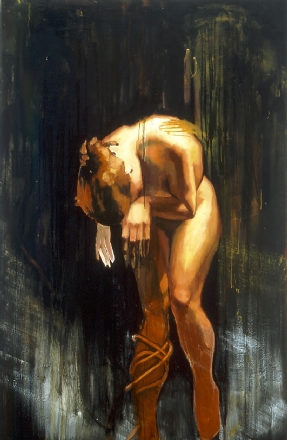 Today, over at Balloon Juice, Cole posted about a commenter who had recently killed herself shortly after her beloved killed himself.  I think her commenting tapered off before I started frequenting the site because her name only vaguely rings a bell.

The reason I am blogging about this is because her last note (on one of the FB Memorial pages) really struck a chord with me.  She talked about how she supposedly had all these things going for her and how it wasn’t enough (I’m paraphrasing).  Her explicit reason (wanting marriage and children more than anything, and feeling she would never find it as she was thirty-four) is not mine, but the similarities between our thinking made me uncomfortable.

I was seven when I realized I would die.  It scared the shit out of me when I thought about not existing for the rest of eternity.  I would jump out of bed, scream, and run around my room because I couldn’t handle the idea.   But, I had a rough childhood.

You know why I didn’t do it?

1) Inertia.  As anyone who has suffered a deep depression knows, sometimes it takes all one’s energy just to drag your ass out of bed (hours later than planned).  I didn’t have the goddamn energy to kill myself.

2) Pessimism.  Life sucked.  Who said whatever is on the other side will suck less?  No one.  And, because I am pessimistic in many ways, I thought that the other side would be worse than this side.

3) My loved ones.  I live alone.  If I killed myself, it might not be noticed for days (though I have a heavy internet presence).  The idea that one of my friends or my brother would find my body made my blood run cold.  In addition, after I got my boys, I realized that if I killed myself, their whole lives would be disrupted.  Sure, I had friends who would give them a good home, but they got it pretty cushy here.  It would seriously disturb them if I were to kill myself.

In addition, something my best friend said to me while I was in the deepest of the abyss really stuck with me.  She said, “Look, if you’re really determined to kill yourself, take a year and do all the things you want to do.  Travel the world.  Enjoy yourself.  Then, if you still want to kill yourself–do it.  If you’re going to go out, go out with a bang.”

What she said made sense.  I was so trapped in my narrow, cramped, tiny space of hell, I couldn’t acknowledge how much sense she made–but I kept it in mind.  One of my strengths is that even if I dismiss an idea right away, I will think about it later.  She gave me this advice a decade ago, and I’ve held onto it every since.

Here is something people who don’t suffer from depression may not know:  the thought of suicide provides a safety net that enables someone with depression to keep on living.  I know it sounds like an oxymoron, but many days I told myself that I could just kill myself if things got too bad.   That actually gave me enough impetus to tolerate one more day.

When I read the note by the woman who committed suicide in the link above, I had mixed emotions.  I wanted to shake her and say, “Did you read what you just wrote?!?!”  She had this logical rationale for killing herself–except, it was all based on faulty thinking.   I was mad at her.  I realize it’s partially because I was seeing a part of myself that I didn’t like.  I have written suicide notes.  I have tried to explain why I would do such a thing.  And, while the reasons made sense to me, I knew there was no way it would be understood by anyone else.  “It’s not you.  It’s me.  There’s nothing you could have done to help me.”  This is all true, but the underlying message still is, “My pain is so unbearable, I will do anything to stop it.  Nothing is worth living for–not even you.”  Granted, this thought is not what is driving someone who’s suicidal, but it’s how the action is inevitably perceived.

There is no logic to suicide, though.  It really is about stopping the unending pain that torments you from day to day–at least, that’s what it was about for me.  Some days, all I could think about was how much everything fucking hurt.  And, if it weren’t for the stated reasons above, I would have gladly done anything to stop the pain.   I didn’t value my life, and I didn’t see why it had any value to anyone else, either.   One of the ramifications of my childhood was that I was convinced that I had to earn the right to live, and I fell further behind every day.  When I was the deepest in the abyss, I firmly believed there was no way I could earn my right to live.

When I was depressed, the world was bleak and gray.  Literally.  Colors were muted, and everything was just–oppressive around me.  It’s hard to think about those times because they weren’t that long ago.  And, last year when I went to Taiwan, I was thisclose to jumping into the Taroko Gorge or walking into the ocean, just like Virginia Woolf.  A friend asked me why I didn’t.  I said because my niece was there, and I didn’t want her to have to live with that image.  And, because as noted above, I wasn’t sure the other side would be any better.

The problem?  I have moments of intense agony that make the ‘I can’t bear this’ feelings of depression come flooding back to me.  And, I have the energy to do something about it.  I don’t want to die, but I fear that in one of those moments, I will do something rash and stupid because as with everything else, the pain I feel now is just so much more intensified.   This new way of being is so foreign to me–I fear I will slip back into my old way of thinking, except with the power to actually do something about it.

Again, reasons 2 & 3 above are most likely sufficient reasons to stop me from doing such a rash act, but I can’t guarantee that in a moment of deep despair, I will act rationally or not-selfishly.

Why am I writing this post?  Well, for one, because I can.  For two, because depression is still hidden to a great extent.  I was excellent in putting on my happy face when I had to be out in public.  When I couldn’t put on the mask, I hid myself.  In addition, depression is a deeply-isolating event.  Isolating in and of itself and because the sufferer withdraws from loved ones.   I know many people have felt this kind of isolation to a certain extent, but it’s off the charts for someone who suffers from severe depression.

The biggest reason I’m writing this post, however, is because I want to be brutally frank to people suffering depression.  Being out of it is not all roses and chocolate.  There is no definite line between being depressed and not being depressed.  For me, it’s been a long, tough slog with much backsliding.  There have been times when I thought I would never make it out the abyss.  There are moments now when I wonder if I have.  I feel lonely and sad and isolated at times, still.  I hurt myself (though not nearly as frequently as I used to do).  At times, I still wonder if it’s worth it.

In other words, there may be no great leap forward.  Progress may be made in incremental steps.  For example:  I have loathed my birthday for most of my life because it just reminds me of how much I’ve failed to live up to whatever it is I’m supposed to do.  I refused to tell people when it was, even if they asked.  Then, it became more of an annoyance.  I still didn’t advertise it, but if someone asked, I would tell her.  Then, a few years ago, I became neutral about it.  I didn’t hate it at all.  Last year, I backslid, and I have a hunch I won’t be sanguine about this year, but I’m still much better about it than I have ever been.

I can hear you say, “Shit, Minna, that’s not very inspiring.”  No, it’s not–not in the, “she overcame all odds, lost a bajillionty pounds, landed the love of her life, won a Tony, became a best-selling author” kind of way.  That’s my point, though.  Overcoming depression rarely is impressive on the ground level because it’s a lot of fucking work.  But, it’s inspirational to me if I look at it in terms of things I would not have done five years ago (such as blogging in general and blogging at ABL’s place in specific) that I am doing now.  Getting a novel published?   Inconceivable five years ago.  Now?  Seems difficult, but attainable.  Learning the sword form in Taiji?  Oooh, scary five years ago.  Now?  Bring it on.

The woman who was so broken and damaged and ruined that she could not fathom she had a future–I am NOT that woman any more.  She didn’t even have a present–all she could do was cling to the past while simultaneously denying it.  I have no hate for her because she enabled me to survive long enough to reach this point.  However, it’s time to say good-bye to her.  The woman I am now has a present with much going on.  I have a future, though I may not know what it entails.  I have kick-ass friends who support me (and make me laugh like crazy), and I have my boys who love me unconditionally (as long as I keep giving them the gushy food and the pets).

I may never get my Tony or my Pulitzer or be a best-selling author.  So what?  I am on MY path finding MY way.  Five years ago?  I never would have thought I could say that, either.

16 Responses to The Unbearable Darkness of Being